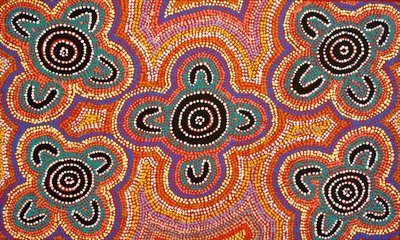 Rock art is one of the oldest forms of art in Australia. The traditional dot painting can be found on bodyart, bark paintings, sand paintings and as decorations of didgeridoos, shields and boomerangs. Much Aboriginal art refers to the “Dreamtime”.
Dotting the background on aboriginal art was used to hide symbols that uninitiated people were not supposed to see. Now it is commonly used for decorative purposes only. 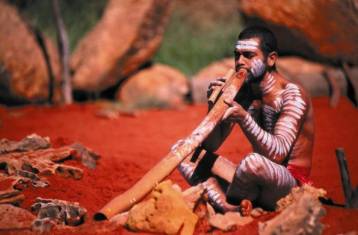 The didgeridoo is made of a tree trunk hollowed out by termites. It can be very difficult to find a  perfect didgeridoo. It has to be properly hollowed. A didgeridoo is played by blowing air into the didgeridoo using a special breathing technique. It is played to accompany traditional dances and songs. Only men play the didgeridoo during ceremonial occasions.

There are two kinds of boomerangs: the one that will return when thrown and the one that will not return. The non-returning one is used for killing animals, and it is more like a stick. The returning boomerang is used for sports or playing, but was perhaps also used for hunting in the past. This boomerang is formed by two “wings” connected to an angle. When it is thrown correctly, it spins and returns to the thrower.

An Aborigine with a boomerang.